The Brantford Sports Council (BSC), formerly the Brantford Minor Sports Association, was established in January 2005. The BSC is a collaboration of sports organizations that work cooperatively to provide a collective voice for the ongoing promotion and education of the benefits of sport within our community and have a long standing partnership with the City
of Brantford.

The Brantford Sports Council is a non profit volunteer group that provided advice and assistance to the Parks and Recreation department on sports related issues and was responsible for distributing significant grants, provided by the City of Brantford annually, to the 14 minor sports founding members.

In 2019, the Brantford Sports Council Chair was invited to be a member of the Municipal Sport Tourism Strategy Task Force on Hosting and Bidding.

In 2020, the Covid-19 pandemic impacted all elements of our community and affecting minor sport organizations in Brantford so the Brantford Sports Council worked with the City of Brantford and the Brant County Health Unit to help mitigate the impacts and keep its members up to date on the current news relating to sport.

In 2021, due to Covid-19 the Brantford Sports Council was unable to hold their annual Sports Recognition Banquet instead they held a virtual Celebration of Youth Sports Week that allowed them to showcase many sport organizations and supported by several community stakeholders. The BSC also held a virtual presentation to recognize the 2020 Sportsperson of the Year award winner.

The Brantford Sports Council supported by Access Self Storage Inc. are planning to take this Sports Complex in a new direction by working with all the Tenants to develop enhanced programming, greater visibility and increased awareness of what the facility has to offer the community at large. Several members operate out of the complex including Brantford City Soccer, Bisons Football, Brantford Minor Baseball, Ball Hockey International, Brantford Track & Field, Briers Basketball, Don Warrener’s Martial Arts and several others.

In 2009, the BSC joined the Community Sports Councils of Ontario, formally the Sport Alliance of Ontario. In 2010, members of the Brantford Sports Council attended the CSC Summit held at Brock University in St. Catharines and began a process of reinvigorating the movement. By late 2010, there were approximately 17 CSCs existing in the province.

In 2005, members of the BSC attended the Sport Summit in Hamilton to learn what other sport councils in Ontario were doing in their communities to promote the values of sport and recreation.

In 2006 the BSC hosted a Long Term Planning workshop for their members and stakeholders and were part of the Facilities Adhoc Committee for the City. Also in 2006, the BSC hosted their Inaugural Sports Recognition banquet to recognize the achievements of local athletes, teams, coaches, and volunteers.

The BSC Chair was invited to participate in the 2020-2025 Brantford Accessibility Plan, a fresh approach to addressing and improving accessibility challenges in partnership with the Community Sport Councils of Ontario. In 2021 the Brantford Sports Council Chair Bill Harding was elected to the Community Sport Council Board as a Director at Large. The BSC has been a proud member of CSCO since 2009. 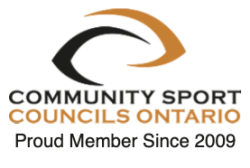 The Brantford Sports Council is working with the City of Brantford and all the sports organizations to facilitate “Return to Play” once Covid-19 restrictions are no longer an issue.

The COVID-19 pandemic has had a significant impact on virtually every facet of life throughout the world. Among youth athletes, the cancellation of school and sports was accompanied by decreases in physical activity and significant mental health consequences. The reintroduction of sports has varied considerably, with the full return of sports in some regions and continued restriction in others. Given that youth sports faced serious problems prior to the pandemic including high costs, professionalization, decreased participation and barriers to access, we should consider more than just returning to ‘normal’. This unexpected pause provides an opportunity to not only guide the return to youth sport participation but invest in programs and organizations that increase physical activity and increase access to sports for all children.